Showing posts from December, 2011
Show all

December 31, 2011
If you're in the Nashville area tonight, this looks like fun!

But, wherever you choose to celebrate, I wish all of you a safe, healthy, and prosperous new year!

December 31, 2011
This old postcard from Argentina shows a little girl with her Grandpa in front of a shop called, "El Amanecer" (The Dawn). In the shop window is a beautiful French boudoir doll!

I Dream of Genie

December 29, 2011
Check out this great boudoir doll! She has composition head and hands and a cloth body. Her costume was made by Sue. Isn't it fantastic! What I love about Sue's work is she keeps to the era, using vintage patterns or using old magazines as inspiration for her designs. This outfit was made, using a 1926 pattern. I love the colors Sue used, and check out the detail; she even made the slippers.

December 28, 2011
Bing Crosby, Bebe Daniels, Douglas Fairbanks Sr in "Reaching for the Moon" 1931. The song is "When the Folks High Up Do the Mean Low Down"

December 27, 2011
This is a very interesting figure. Margie told me his construction reminds her of the pair I blogged about yesterday. I wonder if they're made by the same maker? He still has his original coat and slippers. Was he a Sultan? Perhaps, he's a Genie? Or, maybe, he's a spiritual leader....

At any rate, he's had some misfortune; he lost the lower half of his right arm. He's marked with a number on the back of his neck "488."

From Rags to Riches - A Royal Affair

December 26, 2011
Here are photos of a pair of half-doll type dolls in partially restored costumes, made by the ever-so-talented Margie Herrera. These dolls belong to Carol Willman who had Margie restore their costumes and allowed Margie to share her photos on this blog. Thanks! Below are more photos taken before their transformation. You will notice that most of their original costumes remain and that Margie replaced the badly shredded silk. One thing that can't be replaced, however, is the lady's nose up in the air! She's not having any part of "Prince Charming"'s attentions.

See the tag, below, last photo. These dolls are German/Austrian.

December 21, 2011
I believe this all cloth doll is German-made. She is missing her boots and has red paint that splattered onto her face, but she is still a great doll and wears her original outfit!

December 16, 2011
This old photo of Anna Held, Jr is dated November 28, 1924. The news caption reads, "New York....Theatrical folk of a generation ago well remember Anna Held, who reigned as a leader in the musical comedy world for several years. When her daughter, Anna Held, Jr, came upon the stage to follow the career of her mother, she received a hearty welcome and attained much personal popularity. But now Anna Held, Jr has forsaken the footlights and has opened a novelty shop in Greenwich Village where she not only has on sale a great many interesting articles of various design, but where she also makes many things herself."

Additionally, the photo has the following caption, "Photo shows Anna Held with two French Apache dolls designed by Poiret of Paris. She is getting a light from the Apache cigarette."

From what I've found in photos and magazines, it appears that there were a lot of boudoir dolls designed by famous fashion designers. I love this photo!

December 14, 2011
The all-girl band, The Sleepy Time Gals with their "Turnhead" boudoir dolls. The dolls' heads tilt and can be posed. These boudoir dolls are not a common find.

December 12, 2011
This is a page from an unknown magazine. It's hard to tell in the photo whether the boudoir doll is cloth or composition, however, it looks like part of the doll's costume is made of Raffia.

December 10, 2011
Down through the chimney with lots of toys, all for the little ones, Christmas joys!
Bebe Daniels on the front cover of 1920 Picture Show magazine.
Post a Comment
Read more

December 08, 2011
Here are two old photos, showing a girl with her bear and Keeneye boudoir doll.

December 04, 2011
These photos are a bit fuzzy, but what is clear is that boudoir doll decided to cozy up to the ventriloquist dummy under the Christmas tree!

The Cowboy and the Lady 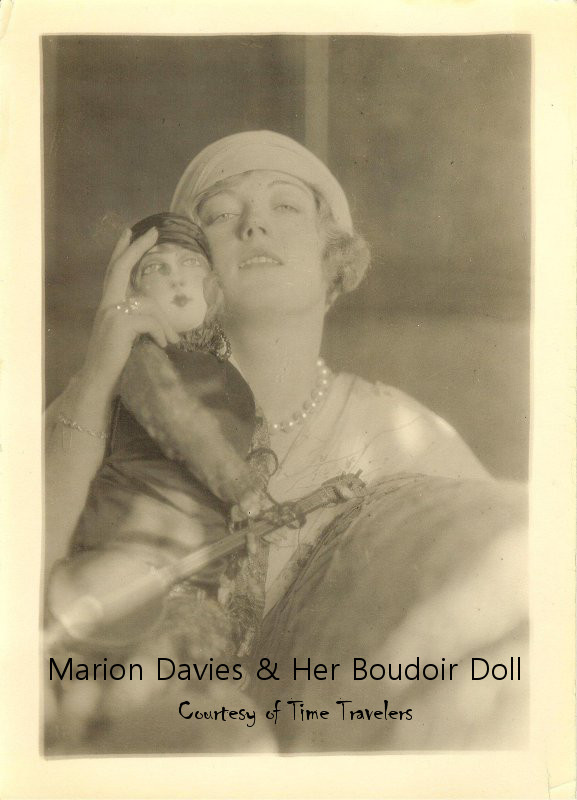 Before You Publish or Use for Presentation

Please get permission to use the photos in this blog. Most photos are marked "Courtesy of...." or a link is attached to show the owner. If you do not know who to contact, you can email me at frauwulf@yahoo.com so I can connect you to the appropriate person. Thanks!